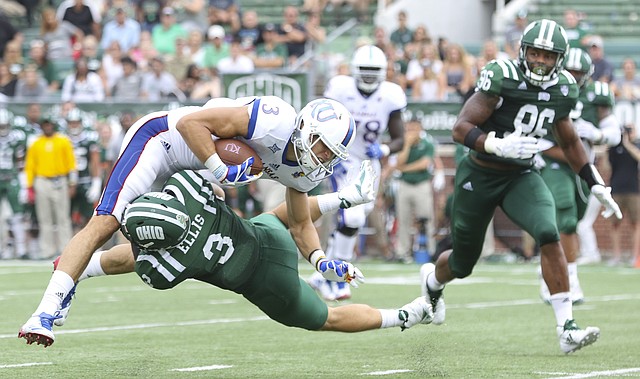 A difficult off-season for the receiver that included witnessing his older brother, Cole, murdered this past December, and an arrest on suspicion of DUI in March, led to Chase Harrell deciding to move on and the program granting him a release. By Benton Smith

This past weekend University of Kansas football receiver Chase Harrell, back home near Houston after the completion of the fall semester, saw his older brother shot and killed at a house party. The Houston Chronicle reported Cole Harrell, 23, died after an argument turned into a violent fight early Sunday morning, in a Summerwood, Texas, home where a small group of people had gathered. By Benton Smith

Get the keys to the KU football team's Big 12 opener before the Jayhawks (1-2) take on West Virginia (2-1). By Benton Smith

Well, this was a new look: The seats began trending toward empty at halftime and the home team was winning easily. Even the boosters of the victors couldn’t stay interested in watching Kansas football, which lost by double digits to a MAC school for the second week in a row Saturday, this time by a misleading 42-30 score to Ohio University at Peden Stadium. By Tom Keegan