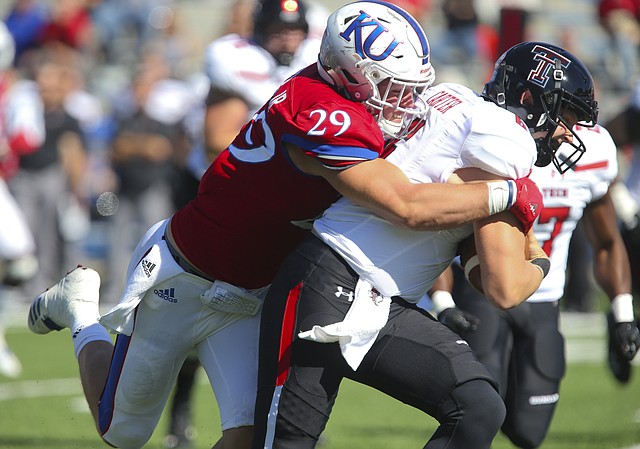 For as long as they can remember, University of Kansas senior linebackers Joe Dineen and Keith Loneker Jr. have been inseparable. Loneker, who is 20 days older than Dineen, have been lifelong friends due to their parents’ connection. Dineen was the only person at Loneker’s first birthday, and there is a photo of them in diapers together. They both played for the same pop warner team when they first started playing football in the second grade.

A week after learning the Big 12’s coaches voted him a second-team all-conference linebacker, Kansas redshirt junior Joe Dineen picked up a national honor Thursday from Sports Illustrated with an even more prestigious ring to it: second-team All-American. By Benton Smith

It’s not often that a football player at the University of Kansas can take the field knowing what he does over the course of the coming four quarters could be applauded or scrutinized on a national stage. That’s the scenario in front of the Jayhawks Saturday night at Amon G. Carter Stadium. TCU’s status as the No. 4 team in the nation inspired FOX to broadcast in prime time what shapes up as a lopsided Big 12 matchup. By Benton Smith