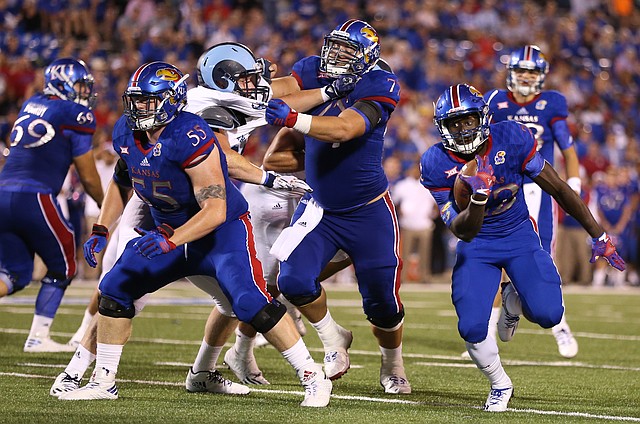 'How cool would that be?': Jayhawks hope to send seniors out in style

Every senior in a Kansas football uniform knows it’s coming. Just how or when it hits them, that remains to be seen. KU will honor the 23 seniors on its roster prior to kickoff (2:30 p.m., ABC) against Texas, Saturday at Memorial Stadium. But dealing with the finality of a college career varies from person to person. By Benton Smith

The Jayhawks ran the ball 35 times for 171 yards and two touchdowns against an overmatched FCS opponent in their debut, but after KU averaged a meager 1.7 yards a carry in a home loss to Ohio, offensive line coach Zach Yenser went as far as referring to the team’s run-blocking the “elephant in the room.” By Benton Smith

Getting 'dirty' the key to success for Kansas football

If the Kansas football team is to move to 2-0 on the season with a victory over MAC program Ohio this weekend, it’s the “dirty work” that’s going to get it done. By Matt Tait