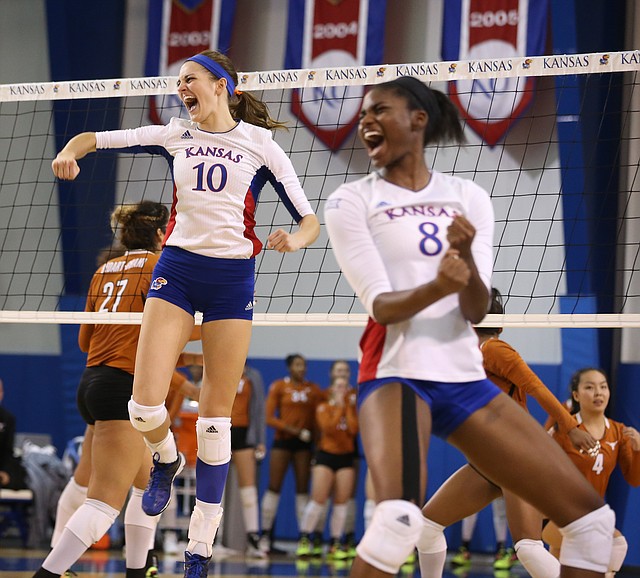 Kansas middle blocker Tayler Soucie (10) and Kansas right side hitter Kelsie Payne (8) celebrate a point during the fifth set on Saturday, Oct. 29, 2016 at the Horejsi Center.

The Jayhawks went 8-0 in five-set matches and won them by an average margin of 15-9.

After leading the Kansas volleyball team to its first Big 12 title in program history, junior outside hitter Kelsie Payne was picked as the conference's Player of the Year, highlighting a long list of Jayhawks to earn postseason honors, announced Monday.

The Kansas volleyball team survived a Wednesday night road match with its one-game lead in the Big 12 standings in tact, but it was far from easy and required five sets.

One day after Kansas junior All-American Kelsie Payne was named Big 12 Offensive Player of the Year for the sixth time in her career, the American Volleyball Coaches Association selected her as National Player of the Week.

Kansas junior Kelsie Payne earned her second Big 12 Offensive Player of the Week recognition in three weeks and sixth of her career, the conference announced Monday.

Asked outside of the team bus about the impact of No. 2 Texas’ five-set loss to No. 6 Kansas Saturday night at Horejsi Family Athletics Center, UT coach Jerritt Elliott had nothing but positive things to say about the team he is now tied with atop the Big 12 standings. By Matt Tait