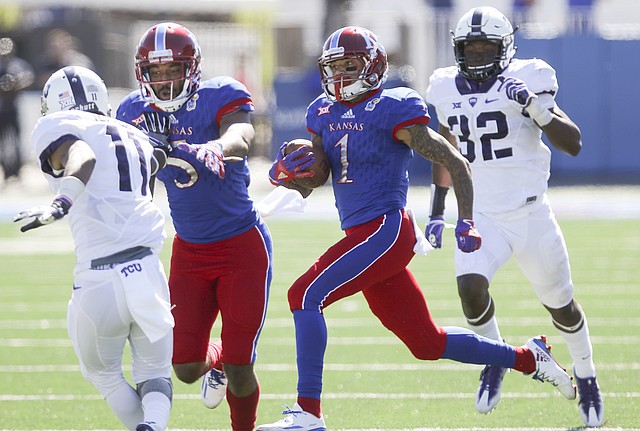 Kansas wide receiver LaQuvionte Gonzalez (1) gets a block from teammate Bobby Hartzog Jr. (5) as he runs for a 70-yard gain during the third quarter on Saturday, Oct. 8, 2016 at Memorial Stadium.

Against Iowa State, Kansas football special teams coordinator Joe DeForest sent kick returner LaQuvionte Gonzalez to the end zone — to hide. Ultimately, the play didn’t set up a score — or even a victory — but it proved bizarre enough to populate the college football Twittersphere and highlight shows on Nov. 12, and the “camouflage” kickoff now has KU up for USA Today Sports’ Coach’s Play Call of the Year. By Benton Smith

After Saturday’s heartbreaking, 24-23 loss to TCU at Memorial Stadium, it’s safe to say people are starting to recognize this whole Kansas-plays-TCU-close phenomenon as a true trend. By Matt Tait