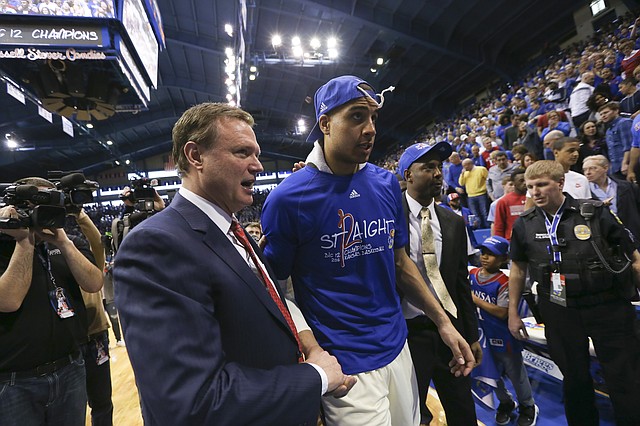 With the Big 12 portion of the Kansas basketball schedule slated to tip off Friday night in Fort Worth, Texas, all of that offseason and preseason talk about the Jayhawks gunning to tie UCLA’s record of 13 consecutive conference titles starts to mean something. By Matt Tait

I considered Texas Tech’s Tubby Smith and West Virginia’s Bob Huggins, but when it came time to fill out my Associated Press All-Big 12 college basketball ballot, I voted Kansas University’s Bill Self as coach of the year. By Tom Keegan

Tubby Smith: Bill Self 'deserves' to be Big 12 Coach of Year

Entering Saturday’s showdown with No. 2 Kansas at Allen Fieldhouse, Texas Tech coach Tubby Smith’s squad had won five consecutive games, six of its last seven and elevated Smith from a coach fans grumbled about to a frontrunner for Big 12 coach of the year honors. And then the Jayhawks knocked off the Red Raiders, 67-58, to clinch KU’s 12th consecutive Big 12 regular-season title. By Matt Tait