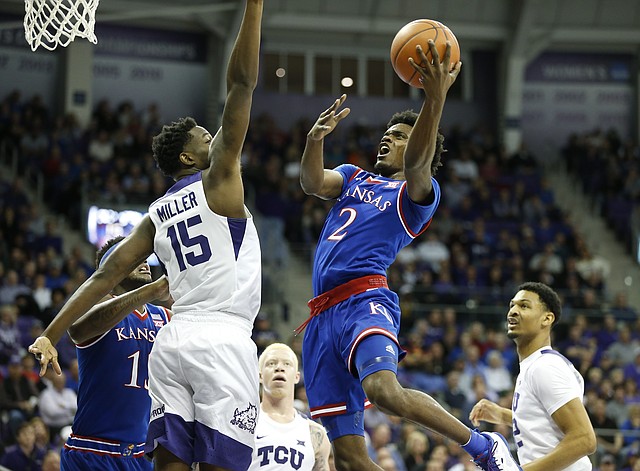 Kansas guard Lagerald Vick (2) floats to the bucket against TCU forward JD Miller (15) during the first half, Friday, Dec. 30, 2016 at Schollmaier Arena in Fort Worth, Texas

A look at some of the keys for 10th-ranked Kansas in tonight's road showdown with No. 16 TCU in Fort Worth, Texas. By Matt Tait

Representing the top seed in the Big 12 tournament at Sprint Center, Kansas coaches and players knew their quarterfinal would come against a team the Jayhawks swept in the regular season. Now they know exactly who they will have to knock off in the quarterfinals to advance. TCU, the event’s No. 8 seed, handled ninth-seeded Oklahoma, 82-63, Wednesday night, setting up a third meeting this season with KU.

A look at some of the keys for third-ranked Kansas in Wednesday night's match-up with TCU. By Matt Tait

Tom Keegan: Two-deep bench for Kansas not too shallow

A seven-man rotation certainly isn’t ideal, but Kansas can get away with it if it can figure out how to defend aggressively without piling up fouls.