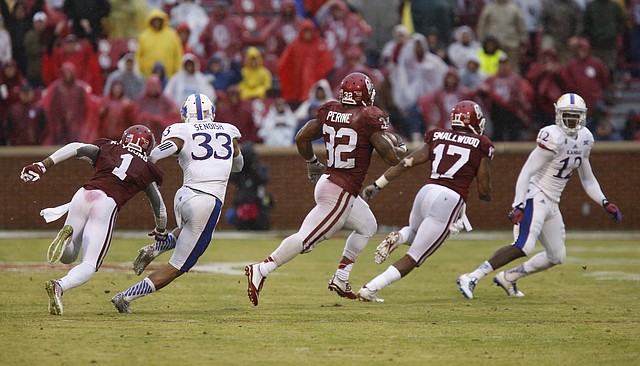 Oklahoma running back Samaje Perine (32) has blockers as he heads up the field against the Kansas defense during the third quarter on Saturday, Nov. 22, 2014 at Memorial Stadium in Norman, Oklahoma.

Perine adds his name to list of greats at KU's expense

You'll have to excuse Wisconsin running back Melvin Gordon if he's not the biggest Samaje Perine fan right now. One week after Gordon was the talk of college football after breaking former TCU great LaDainian Tomlinson's 15-year-old, single-game NCAA rushing record with a 408-yard romp in a victory over Nebraska last weekend, the Oklahoma freshman Perine dropped Gordon into second place on the all-time list with a 427-yard effort during Saturday's 44-7 whipping of Kansas University. By Matt Tait