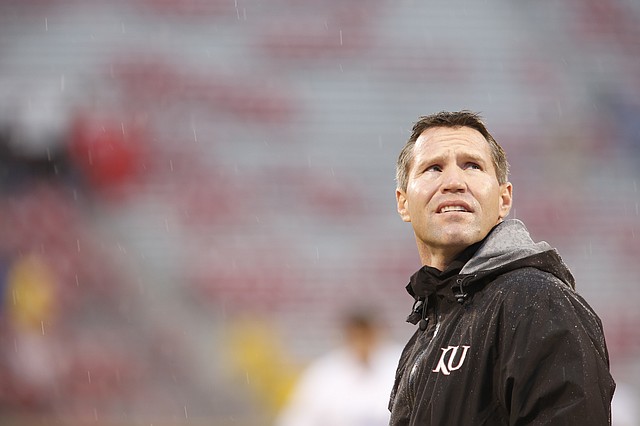 Kansas interim head football coach Clint Bowen looks out over the stadium as the rain comes down prior to kickoff against Oklahoma on Saturday, Nov. 22, 2014 at Memorial Stadium in Norman, Oklahoma.

Although he has spent most of his professional life on the sidelines with the Kansas football program for which he played, longtime Jayhawks assistant Clint Bowen has left KU. As first reported Thursday afternoon by the Journal-World, Bowen, KU’s safeties coach during Les Miles’ first season with the Jayhawks, was announced as the new defensive coordinator at North Texas. By Benton Smith

What has to rank as one of the worst weeks in the history of Kansas University athletics included basketball coach Bill Self reaching for a glass of water and cracking that he had hoped it was filled with Vodka. It ended with interim head football coach wishing he could reach for amnesia dust to sprinkle on his players. Column by Tom Keegan