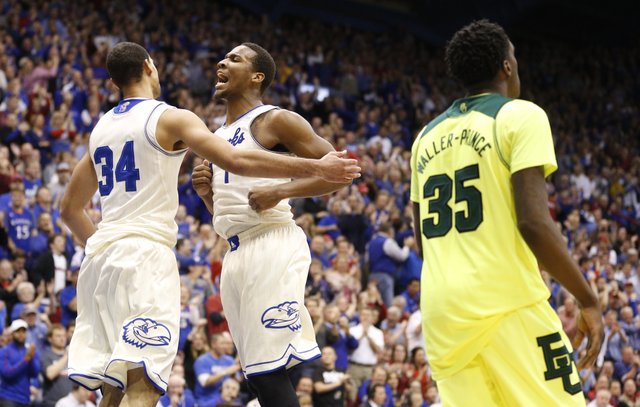 Kansas teammates Perry Ellis (34) and Wayne Selden chest bump before Baylor forward Taurean Prince following a dunk by Ellis and a foul by Baylor forward Cory Jefferson during the second half on Monday, Jan. 20, 2014 at Allen Fieldhouse.

KU basketball edges Texas for No. 1 spot in preseason poll

If the Big 12 preseason men’s basketball poll is any indication, Kansas University will have some serious competition in its search for an 11th consecutive conference championship.

Four in a row: Kansas pulls off rare feat vs. ranked foes

For the first time in a long time, a college basketball team has rattled off four consecutive regular-season victories against ranked squads. With a 78-68 home win against No. 24 Baylor, No. 8 Kansas became the first team since 1996-97 North Carolina to take four straight against AP top 25 teams. By Gary Bedore