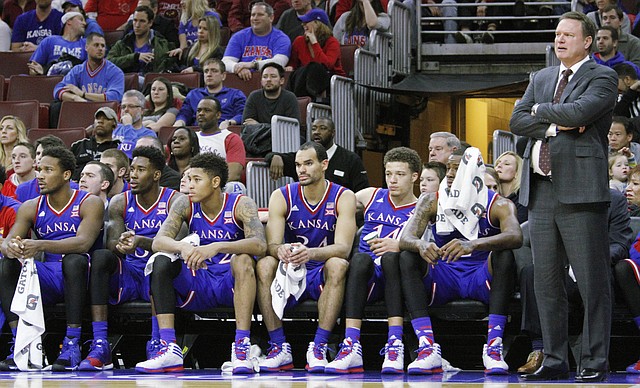 Kansas University basketball coach Bill Self’s Jayhawks played the toughest schedule in the country the past two seasons, according to strength-of-schedule ratings calculated by ESPN.com. By Gary Bedore

Jayhawks hope to put lackluster loss behind them

Kansas basketball coach Bill Self — who has used the words terrible, pitiful and horrific to describe the Jayhawks’ 25-point loss to Temple eight days ago — has resisted any temptation to overreact to his squad’s pre-Christmas flop in Philadelphia. By Gary Bedore

Though they currently may be dazed and confused following a 25-point loss to unranked Temple, Kansas University’s basketball players nonetheless figure to be refreshed and ready to go for the remaining three months of the marathon 2014-15 season following what they hope is a relaxing three-day Christmas vacation.

Monday, when Kansas University lost 77-52 to Temple, it was KU’s last game before Christmas, and the players were allowed to head to their respective homes after the  game, not having to return to Lawrence until Friday night.