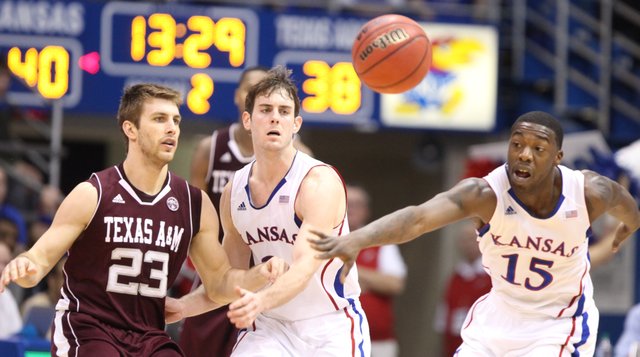 Kansas defenders Conner Teahan, center, and Elijah Johnson defend against a pass from Texas A&M guard Zach Kinsley during the second half on Monday, Jan. 23, 2012 at Allen Fieldhouse.

Texas A&M assistant basketball coach Kyle Keller, who worked on Kansas University’s staff the past three seasons, has taken great pride in watching the Jayhawks from afar during the 2011-12 campaign.

With junior forward Khris Middleton’s 12.4 points per game and general experience out of the Texas A&M lineup because of injury Monday night, scoring became an issue for the visitors from College Station, Texas.