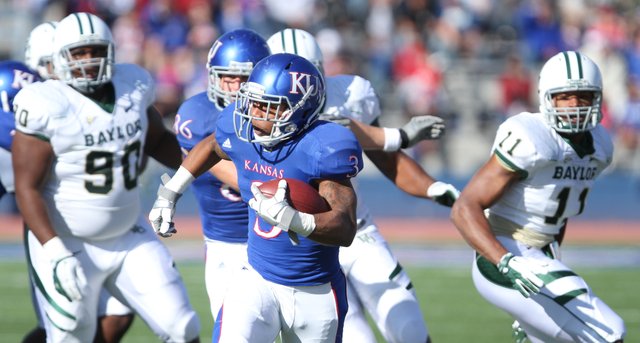 KU's Miller hopes to make most of second chance

When news broke in late May that former Kansas University running back Darrian Miller was coming back to Lawrence to rejoin Charlie Weis’ program, the only official reaction from KU came through a press release that included comments from Miller about being thankful for the second chance.

Former Kansas University running back Darrian Miller, a standout from Blue Springs, Mo., who was one of the bright spots for the KU offense during the 2011 season, will rejoin the program and be eligible to play this fall, KU coach Charlie Weis confirmed Tuesday morning. By Matt Tait

With the way he has run from the first scrimmage of the spring to last week’s loss against Baylor, it’s hard to believe the Kansas University coaching staff once questioned Darrian Miller’s commitment.

Although the effort was overshadowed by Saturday's 31-30 overtime loss to Baylor, Kansas University freshman running back Darrian Miller paced the KU rushing attack with a career day. Miller's 147 yards on 24 carries were the most by a KU freshman since 1993 and also represented a new career-high for the 5-foot-10, 191-pound back from Blue Springs, Mo.