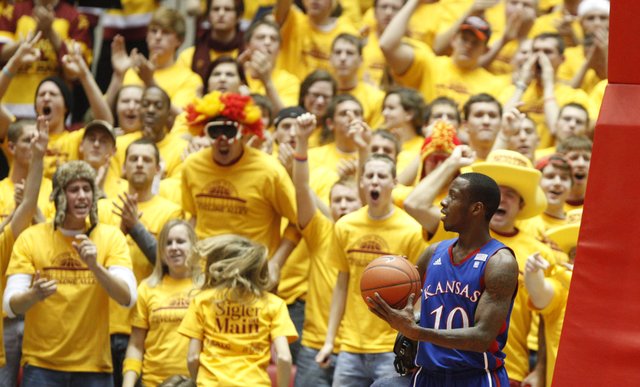 Kansas guard Tyshawn Taylor glances over as the Iowa State student section, "Cyclone Alley," goes wild following an ISU three-pointer during the first half on Wednesday, Jan. 12, 2011 at Hilton Coliseum in Ames, Iowa. Despite the hostile environment, the Jayhawks held on to win, 84-79.

Just two of 10 teams in the Big 12 Conference have won more league road games than they have lost during Bill Self’s nine seasons at Kansas University. They are ... KU, which takes a 50-17 league road record (.746) under Self into today’s 1 p.m. contest at Iowa State, and Rick Barnes’ Texas Longhorns, a whopping 15 games behind the Jayhawks at 35-32 (.522).