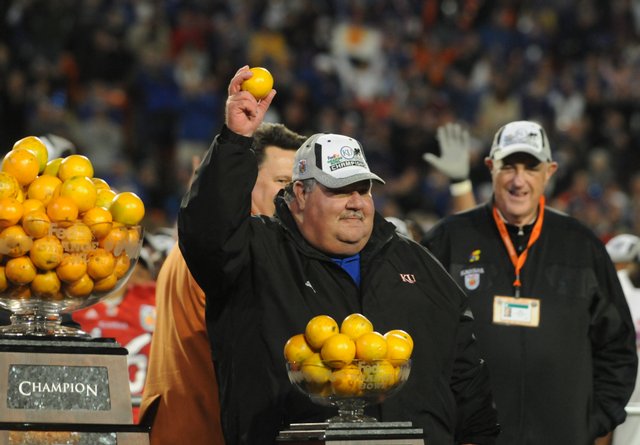 During the most successful year of Les Miles’ career as a head football coach, another program with a far less stellar reputation than LSU experienced the most prosperous season in its history. By Benton Smith

Listening to Kansas football head coach David Beaty and defensive coordinator Clint Bowen talk about what Mark Mangino's return to Memorial Stadium means to them and listening to Mangino talk about the role his gratitude for KU’s loyal football fans played in his decision to come back, a thought occurred: Could the season-opening game vs. Southeast Missouri State be the school’s first football sellout since Mangino was head coach?

Mark Mangino’s image might have taken a hit following his messy departure from Kansas University’s football program, but his pocketbook suffered no such fate.

Kansas University football coach Mark Mangino, the 2007 consensus national coach of the year after leading the Jayhawks to a 12-1 record, signed a contract amendment Tuesday that will pay him $2.3 million a year through 2012, an increase of $800,000 from his previous deal.

New deal for Mangino in works

Kansas University football coach Mark Mangino signed a five-year contract in 2006 which paid him $1.5 million per year. Nobody knew at the time that it'd take just one special season to outdate it.