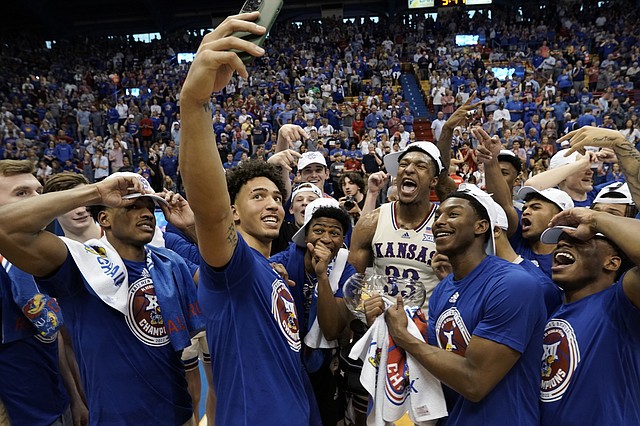 Kansas forward Jalen Wilson puts up his phone to get a photo of his teammates following the Jayhawk's 70-63, overtime win against against the Texas.

College basketball’s 2022 national champions got together one last time on Thursday night inside the very building where they’ll soon be raising another banner. It was team banquet time for the Kansas Jayhawks at Allen Fieldhouse, and this team had more to celebrate than most. By Matt Tait

The Trophy Returns: No. 6 Kansas wins share of Big 12 regular-season title with gritty OT win vs. No. 21 Texas

David McCormack, Jalen Wilson and Christian Braun all finished with a double-double as Kansas clinched a share of the Big 12 regular-season title on Saturday with a 70-63 overtime victory against No. 21 Texas at Allen Fieldhouse. By Matt Tait