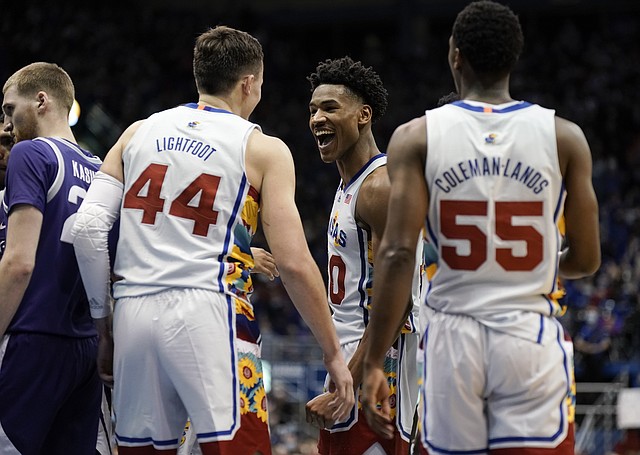 Former Kansas guard Ochai Agbaji is in Chicago at the NBA’s pre-draft combine for the second year in a row, however, this time he will not be scrimmaging. Agbaji’s father, Olofu, told the Journal-World on Wednesday afternoon that his son elected to sit out of the scrimmages because he decided he’s “not taking any chances.”

Top-seeded Jayhawks gearing up for Sweet 16 showdown in Chicago

As the top-seeded Kansas basketball team prepares to head to Chicago, the Jayhawks continue to watch All-American guard Ochai Agbaji rack up honors and are getting closer to getting fully healthy ahead of their Sweet 16 matchup with 4th-seeded Providence on Friday night. By Matt Tait

Now that the final stage of his Kansas career has arrived, Kansas senior Ochai Agbaji has one more opportunity to put a bow on his legacy. Kansas coach Bill Self has already broken the news that Agbaji’s name and No. 30 one day will be hanging in the south rafters at Allen Fieldhouse. But both he and Agbaji know that, as special as that honor will someday be, there’s still business to take care of this season first. By Matt Tait

Senior Sendoff: Kansas basketball's unique, 6-man senior class has contributed in a variety of ways during past 4-plus years

A unique group of Kansas basketball seniors is set to say its final farewell to Allen Fieldhouse and the adoring KU fan base on Saturday in the regular season finale for the sixth-ranked Jayhawks. By Matt Tait