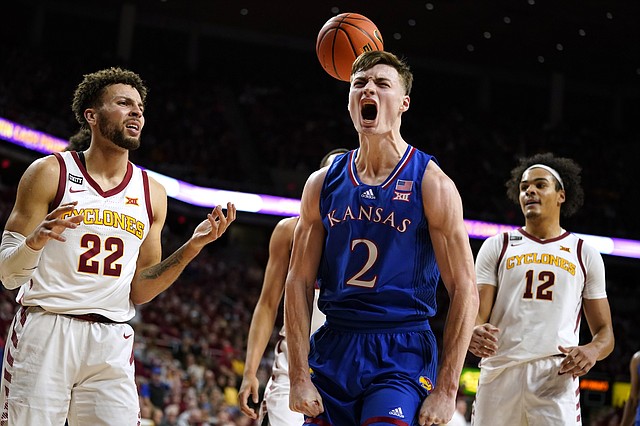 Kansas junior Christian Braun is staying in the NBA draft after making what his mother, Lisa, called “a tough decision” to forego his senior season at KU. By Matt Tait

Jayhawks jump to No. 3 in final AP poll before NCAA Tournament

The Kansas men’s basketball team, which is one of four No. 1 seeds in this year’s NCAA Tournament, moved up three spots from No. 6 to No. 3 following wins over West Virginia, TCU and Texas Tech for the Big 12 tourney title. By Matt Tait

Despite playing without senior guards Ochai Agbaji and Remy Martin, 10th-ranked Kansas basketball team won 70-61 at No. 20 Iowa State on Tuesday. David McCormack had 14 points and 14 rebounds on 7-for-7 shooting, and Dajuan Harris Jr. also scored 14 points. Fellow-starters Jalen Wilson and Christian Braun each scored 13 points for the Jayhawks and a couple of reserves contributed in big ways, as well. By Matt Tait