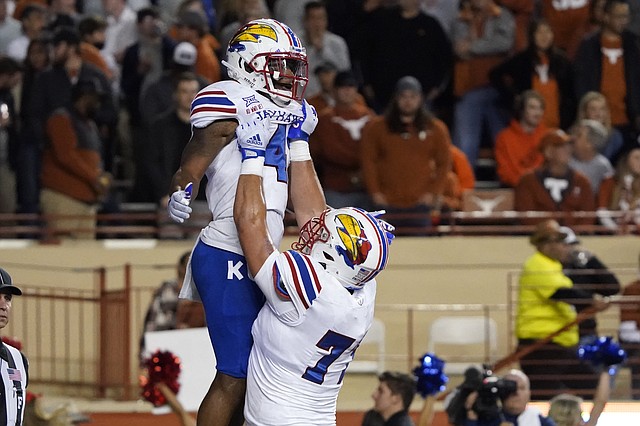 Kansas running back Devin Neal (4) celebrates his touchdown run against Texas with teammate Bryce Cabeldue (77) during the first half of an NCAA college football game in Austin, Texas, Saturday, Nov. 13, 2021. (AP Photo/Chuck Burton)

After playing a starring role in the Kansas football team’s attention-grabbing overtime win at Texas this past Saturday, running back Devin Neal was named the Big 12’s Offensive Player of the Week on Monday.

A blissful opening half for the perennial Big 12 underdog Kansas football program set the stage for the Jayhawks’ first conference road victory in 13 years Saturday night at Darrell K. Royal-Texas Memorial Stadium. But it would take overtime to make it happen in Austin, Texas.