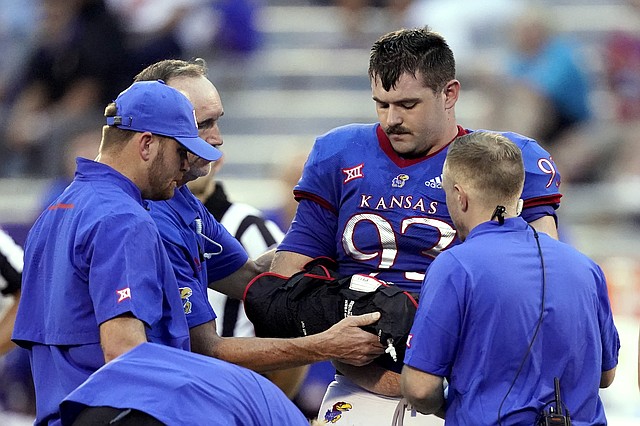 Kansas defensive lineman Sam Burt (93) is helped off the field after an injury during the first half of an NCAA college football game against South Dakota Friday, Sept. 3, 2021, in Lawrence, Kan. (AP Photo/Charlie Riedel)

Sam Burt learned after he broke his right arm last season that he could play one additional year for the Kansas football team. He opted to do so, and now will return for one last chance to help the Jayhawks move forward.

Sam Burt may not play in KU football's rivalry game, but the veteran is making an impact

One of the Kansas football players most fired up for this week’s Sunflower Showdown might not get to play one snap versus Kansas State on Saturday at David Booth Kansas Memorial Stadium. Nonetheless, super-senior Sam Burt is having an impact for the Jayhawks during their rivalry week.