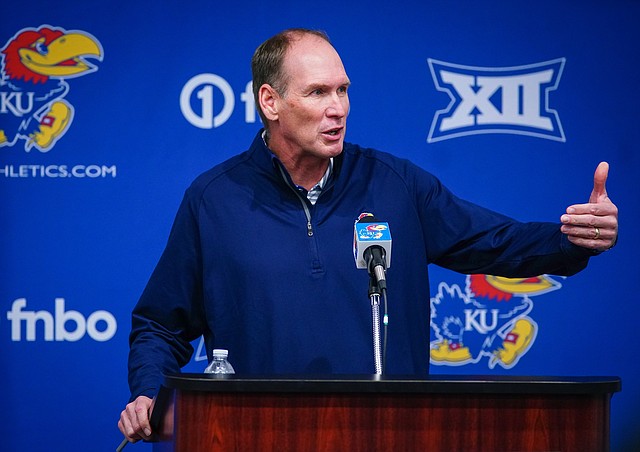 Six of the newest players on the Kansas football roster already know what it’s like to play for head coach Lance Leipold and the assistants who followed him from Buffalo to Lawrence. And much in the way Leipold envisions staff familiarity helping the Jayhawks in his first year in charge of the program, because Leipold also is aware of what he can expect out of the UB transfers, KU’s new head coach thinks their presence will play a crucial part in the transition, too.

Kansas football head coach Lance Leipold announced on Friday the hiring of three new members of the Jayhawks’ support staff, as well as a new role for another staffer.

With pandemic recruiting restrictions finally lifted by the NCAA as of Tuesday, when the calendar turned to June, Kansas football head coach Lance Leipold anticipates the next few weeks will be bustling around the facility.

'What does Kansas need?': Jayhawks' introduction to program reboot to begin with help of strength coach Matt Gildersleeve

The first week that Matt Gildersleeve was in Lawrence, the Kansas football team’s new director of sports performance didn’t leave the facility without talking at length each night with his boss, head coach Lance Leipold, about their summer plans for a program in need of a reboot.

Before the Kansas football team’s new offensive and defensive coordinators fielded questions from reporters for the first time since joining the staff, their boss, Lance Leipold, reiterated how important he thought it was to bring them and several of his longtime coaches aboard.