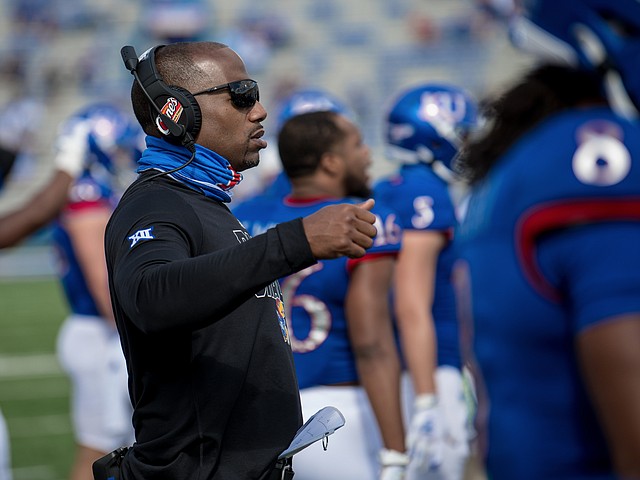 Even though Texas Tech’s hiring of former Kansas football receivers coach Emmett Jones means KU will benefit from a $600,000 buyout, KU head coach Lance Leipold said the university did its best to keep Jones in Lawrence.

'I want to be a part of the change': Why Emmett Jones stuck with KU football

The latest search for the next head football coach at the University of Kansas didn’t conclude with a promotion for Emmett Jones, who led the Jayhawks on an interim basis throughout the spring. Nevertheless, the receivers coach didn’t hesitate to stick around when Lance Leipold took over the program and offered him that chance.

The Kansas football program had a new visitor at practice on Tuesday when Travis Goff, KU’s athletic director, stopped by. With Goff set to have an introductory press conference on Wednesday, many are wondering what his plans for the future of the program entail, and exactly how long interim head coach Emmett Jones will remain in charge of the program.

Emmett Jones didn’t envision getting an opportunity at this point of his career to lead the Kansas football program. But as the Jayhawks’ interim head coach explained in his first interview since accepting the position, Jones is welcoming his current unexpected circumstances.

A popular assistant on the Kansas football staff since he arrived in Lawrence as the receivers coach in December of 2018, Emmett Jones’ reputation with the program’s players clearly played a role in KU naming him the interim head coach, following the departure of Les Miles.