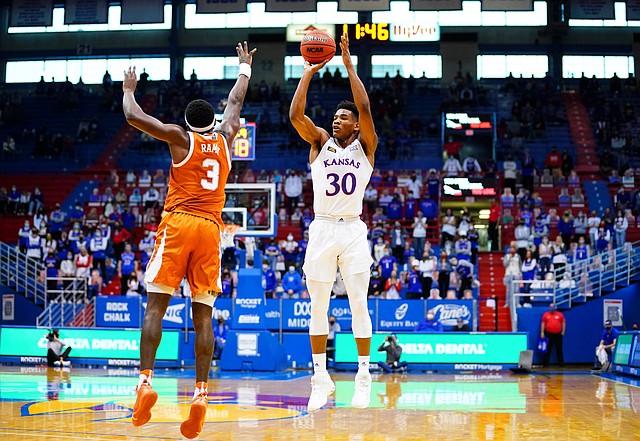 Kansas guard Ochai Agbaji (30) puts up a three over Texas guard Courtney Ramey (3) during the first half, Saturday, Jan. 2, 2021 at Allen Fieldhouse.

University of Kansas senior-to-be Ochai Agbaji has officially received an invite to the NBA’s pre-draft combine in Chicago. By Matt Tait

KU-Texas men's hoops game in Austin pushed back a day to Feb. 23

The Big 12 Conference on Thursday announced three changes to the upcoming men's basketball schedule, one of which involved Kansas.

To kick off 2021, the Texas men’s basketball team led wire-to-wire for a 84-59 win over Kansas Saturday afternoon in Allen Fieldhouse. It snapped an eight-game win streak for the third-ranked Jayhawks, while the No. 8 Longhorns have now won four in a row.