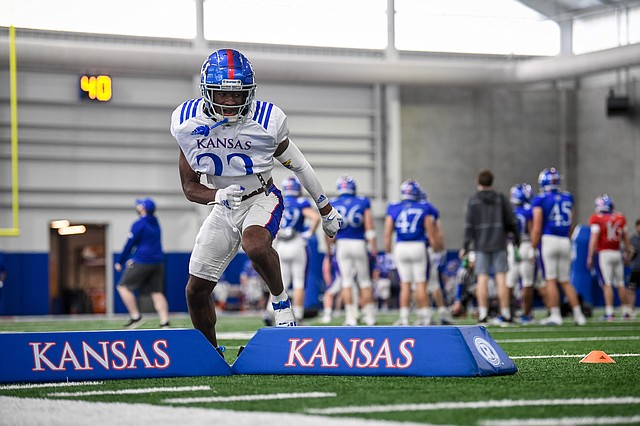 Notebook: KU football prepared to enter season with a lot of youth in secondary

When the Kansas football team opens the season on Friday versus South Dakota, head coach Lance Leipold and his staff will find out more about the Jayhawks’ young secondary. In the meantime, Leipold said the defensive backs — a group in which five of the eight players listed on KU’s first published depth chart are underclassmen — have impressed him this preseason with their athleticism and overall competitive nature.

The Kansas football team’s coaches and players knew the moment that Karon Prunty left the program via the transfer portal earlier this summer that the cornerback position would look vastly different for the Jayhawks this fall. Now that the team is into its second week of preseason camp, cornerbacks coach Chevis Jackson is starting to get a clearer picture of what to expect from his group.

As much as the Kansas football team leaned into getting its youngest prospects onto the field in 2020, only a select few true freshmen, including cornerback Duece Mayberry, actually played in every game. Though he didn’t start at all this past fall, Mayberry is grateful to bring so much experience with him into his sophomore season.