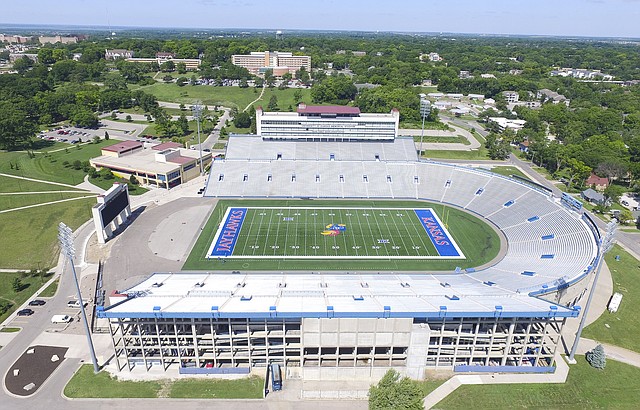 A “gateway” project near the University of Kansas' football stadium could cost more than $300 million, and university leaders are interested in a hotel/convention center and a significant health care presence on the site, KU’s chancellor said Thursday. By Chad Lawhorn

The University of Kansas is getting more serious about upgrades to its football stadium — and this time the plans may involve far more than football.

The Long Wait: A look back at empty renovation plans for KU’s Memorial Stadium and where things go from here

After several planning sessions and promises over the past dozen years, few substantive renovations have taken place at David Booth Kansas Memorial Stadium and questions remain about what's next. By Zac Boyer

A former University of Kansas football player says the university offered him more than $50,000 in benefits if he left the program and stayed quiet about harassment he experienced from four other players on the team. The Associated Press

Kansas Athletics on Tuesday night released the results of its most recent round of COVID-19 testing, which yielded zero positives in 156 tests. By Matt Tait