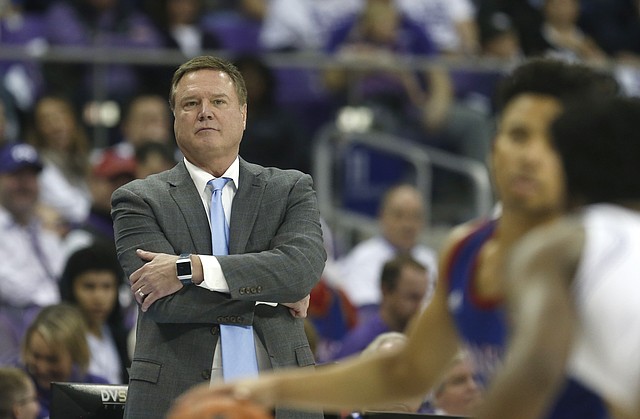 The Kansas Legislature wrapped up its most recent session last weekend without passing a name, image and likeness bill that initially passed in the Kansas House. By Matt Tait

Set to enter his 19th season at the helm of Kansas basketball, KU coach Bill Self said Wednesday he was appreciative of his recently signed lifetime contract and not at all worried about the optics of that contract as the Jayhawks remain embroiled in an NCAA infractions case. By Matt Tait

The Kansas men's basketball team is no closer to setting its rotation for the upcoming season today than it was when official practices first began a few weeks ago, but that's not because KU coach Bill Self is without options. By Matt Tait

The Kansas men’s basketball program is responding to the recent rise in COVID-19 cases by pushing its return-to-campus date back for the second time in three weeks, KU coach Bill Self told the Journal-World on Wednesday. By Matt Tait

Kansas basketball coach Bill Self aiming to listen, learn more about role of race in America

In the month since the death of George Floyd at the hands of the Minneapolis Police Department, Kansas basketball coach Bill Self has spent a lot of time thinking about race, social injustice and ways he can help. By Matt Tait

Never one to gush over personal milestones, Kansas coach Bill Self picked up a pretty big one with Saturday’s 60-46 victory over TCU at Ed & Rae Schollmaier Arena. The win, which moved the third-ranked Jayhawks to 20-3 on the season and 9-1 in Big 12 play, was the 700th of Self’s Hall of Fame career, making him the 32nd men’s college basketball coach to reach that mark and the second fastest to do it behind legendary coach Bobby Knight. By Matt Tait