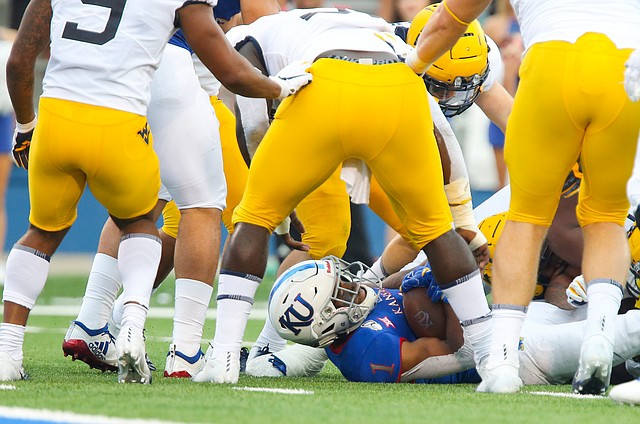 Kansas running back Pooka Williams Jr. (1) lays on his back under several West Virginia defenders after being stopped short of the goal line during the fourth quarter on Saturday, Sept. 21, 2019 at Memorial Stadium.

Whether it was shortcomings with his game plans, individual instruction or in-game play-calling — or some other reason — that cost former Kansas football offensive coordinator Les Koenning his job, head coach Les Miles didn’t choose to share that information Monday afternoon, during his first press conference since firing Koenning. By Benton Smith

'I've got to change how I run': After game of career lows, RB Pooka Williams says he's not worried about stats

“Linebackers, when they play us they don’t play true to their game. They just see a hole and fill a hole." In other words, when KU hands the ball off or tosses it to Pooka Williams, defenses are selling out to stop him. By Benton Smith