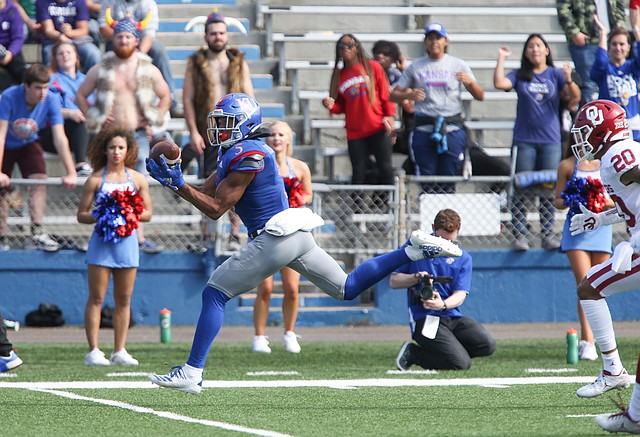 One of the breakout performers for the Kansas football program in 2019, former Jayhawks receiver Stephon Robinson Jr. will next be catching passes in the Big Ten.

The NCAA’s transfer portal continues to be a popular route for Kansas football seniors looking to extend their careers, and on Tuesday the Jayhawks lost receiver Stephon Robinson Jr. via the same exit ramp.

Notebook: Miles hopes to bring back WRs Robinson and Parchment

There are at least two seniors on the Kansas football roster Les Miles would like to see take advantage of the NCAA’s blanket waiver for an extra year of eligibility. KU’s head coach, while discussing some of this year’s seniors on his “Hawk Talk” radio show on Wednesday evening, identified receivers Stephon Robinson Jr. and Andrew Parchment as players the staff would want to invite back for the 2021 season.

When the Big 12’s football coaches and a panel of media members selected their respective all-league teams for 2019, only two Jayhawks made the cut. But even more KU standouts were included when national college football writer Phil Steele unveiled his all-conference choices this week. By Benton Smith

Kansas football coach Les Miles, happily reciting some statistics from his team’s just completed victory over Texas Tech on Saturday night, had to stop himself after reading the stat line for Stephon Robinson Jr. “Oh, my goodness,” the giddy coach remarked, after saying the numbers out loud. By Benton Smith

With a 25-point home loss to No. 6 Oklahoma still taking up space in their minds, Kansas football players and head coach Les Miles didn’t really have any momentum to cling to while heading into their first bye week of the season. However, receiver Stephon Robinson provided one positive development the Jayhawks (2-4 overall, 0-3 Big 12) can take with them into the second half of the season.