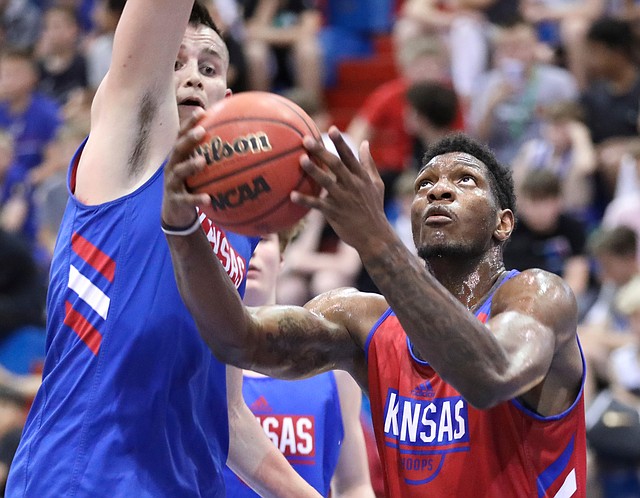 Kansas forward Silvio De Sousa gets to the bucket against Kansas forward Mitch Lightfoot during a scrimmage on Tuesday, June 11, 2019 at Allen Fieldhouse.

Former University of Kansas forward Silvio De Sousa confirmed to the Journal-World on Tuesday afternoon that he is headed to Tennessee to continue his college basketball career at Chattanooga. By Matt Tait

When Kansas center Udoka Azubuike and forward Silvio De Sousa elected to return to KU for the 2019-20 season, the move did much more than solidify the Jayhawks’ front court. It also added some much-needed experience to the Kansas roster. By Matt Tait

'He wouldn’t get off the court': Silvio De Sousa makes long-awaited return during KU camp scrimmage

There was no official box score and no designated stat keeper, but in the case of Kansas junior Silvio De Sousa neither was needed. Tuesday marked the first of two annual Bill Self Basketball Camp games, and De Sousa, now 19 days removed from being declared eligible for the 2019-20 season by the NCAA, was out on the floor in front of a couple hundred campers ready and willing to put on a show.