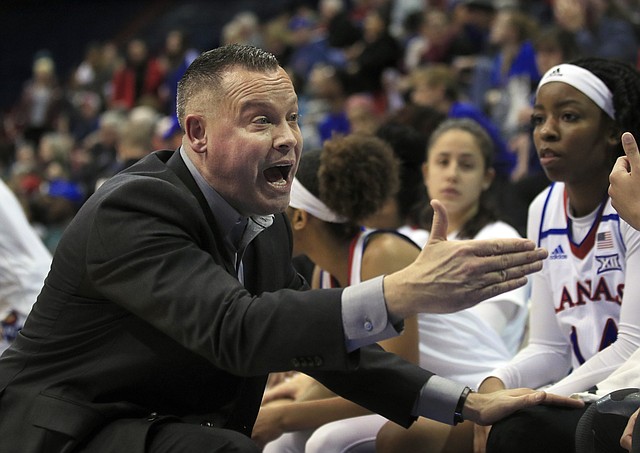 Kansas head coach Brandon Schneider talks to his team during the first half of an NCAA college basketball game against Baylor in Lawrence, Kan., Wednesday, Jan. 16, 2019. (AP Photo/Orlin Wagner)

Head coach Brandon Schneider cleared 450 career wins as Kansas women’s basketball held off Saint Louis in overtime, 68-60, in Chaifetz Arena on Sunday afternoon. The Jayhawks improved to 10-0 with one nonconference game remaining, while Saint Louis fell to 7-5 on the year.

With turnover in college basketball becoming more prevalent with the addition of the transfer portal and players leaving due to graduation or turning professional, coaches constantly have to adjust.

Kansas women’s basketball coach Brandon Schneider characterized a Wednesday morning meeting with first-year KU athletic director Jeff Long as having gone well and came away feeling like Long was in his corner. By Matt Tait