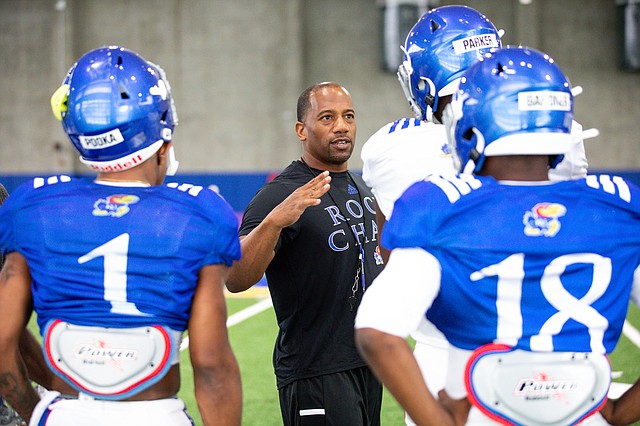 The interim head coach for Kansas football this past spring and the Jayhawks’ receivers coach each of the past three seasons, Emmett Jones reportedly is leaving the program to return to Texas Tech.

As candidate to become KU football's permanent head coach, Emmett Jones plans to be himself

Travis Goff informed Emmett Jones he would be among the prospective hires during his process of finding the next KU football head coach. Now in his third year as KU’s receivers coach, Jones said to ultimately secure the permanent job, he only needs to be himself. “I don’t need to get out of character. I just need to be Emmett Jones. Continue to be who I was as far as how I got here,” said Jones.

At least some of the uncertainty surrounding the Kansas football program’s future dissipated Thursday, as Emmett Jones was named the Jayhawks’ interim head coach.

Kansas football receivers coach and passing game coordinator Emmett Jones used the same two words to describe his anticipation for the arrival of two of his newest pupils: “can’t wait.” Jones had plenty more to say, too, about Class of 2021 early signees Majik Rector and Kelan Robinson.

When the University of Kansas promoted the football team’s receivers coach, Emmett Jones, to passing game coordinator and extended his contract, the administration also made sure to make it a little less appealing for other teams to hire him away. By Benton Smith

After one season as the receivers coach on Les Miles’ Kansas football staff, Emmett Jones impressed his boss and the Kansas Athletics administration enough to gain a new job title and a contract extension. By Benton Smith

“I know them well, man, and I know what they bring to the table,” Emmett Jones said of KU football's receiver signees. By Benton Smith

Emmett Jones coaches the receivers on the University of Kansas football roster. But not a day goes by without Jones staying in the ear of outside linebacker Steven Parker. By Benton Smith