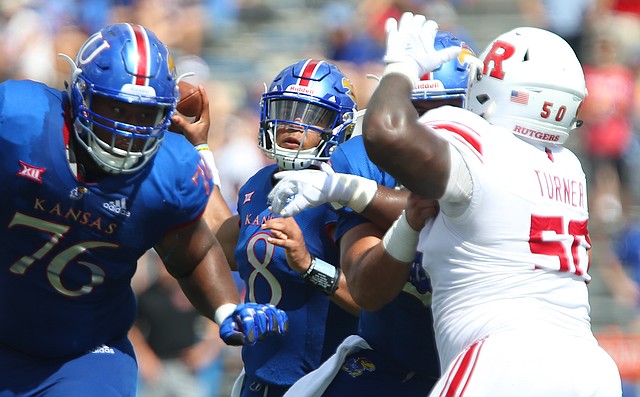 This Saturday Carter Stanley will play his final game at the University of Kansas. Once it’s over, the Jayhawks will have to replace a senior starting quarterback leaving the program ranked second all-time in touchdown passes (37). By Benton Smith

In the final season before head coach Les Miles took over the Kansas football program, 27 different players on the 2018 roster finished the season eligible to use the year as a redshirt season. According to KU, as the Jayhawks head into 2019, every one of them ended up taking a redshirt. By Benton Smith

After suffering a shoulder injury during the Kansas football team’s 26-7 road loss at Baylor this past Saturday, sophomore quarterback Miles Kendrick’s status for the Jayhawks’ upcoming matchup with Oklahoma State remains undetermined. By Benton Smith

Waco, Texas — Backup quarterback Miles Kendrick left the game with an unspecified injury midway through the third quarter and did not return.

Does KU football have a QB controversy?

Head coach David Beaty planned all along to use Miles Kendrick in every game this season. Just three weeks in, though, the dual threat sophomore reserve played more than senior starter Peyton Bender in the Jayhawks’ 55-14 thumping of Rutgers. By Benton Smith