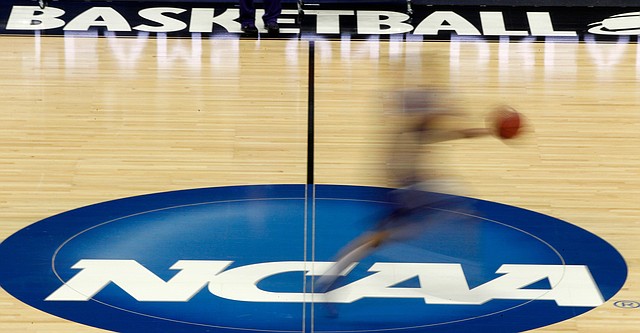 NCAA tournament games will not be open to the general public because of concerns about the spread of coronavirus. NCAA President Mark Emmert said Wednesday that he made the decision to conduct both the men's and women's tournaments, which begin next week, with only essential staff and limited family in attendance.

In response to NCAA, KU argues evidence does not support allegations of violations

The University of Kansas on Thursday responded to NCAA allegations of recruiting violations, arguing that the organization’s evidence in the case is not credible.

The NCAA took the first step Tuesday toward allowing amateur athletes to cash in on their fame, voting unanimously to permit them to "benefit from the use of their name, image and likeness."

The NCAA is suspending its deadlines for schools to respond to charges levied by the governing body in the wake of college basketball's corruption scandal.

The NCAA won't be able to get its hands on one of the most intriguing wiretaps obtained by the FBI in an investigation of basketball recruiting violations involving the University of Kansas, according to a CBS Sports report. But KU may soon face a reckoning with the NCAA anyway.

A federal judge on Thursday denied the NCAA’s request to obtain unreleased information gathered by the FBI for a college basketball corruption court case, according to a filing in the U.S. District Court for the Southern District of New York.

NCAA sanctions on basketball programs caught up in the Adidas fraud trial won’t be resolved until after the Final Four this spring, NCAA president Mark Emmert said, according to a Yahoo Sports report on Wednesday.

The FBI has given the NCAA clearance to begin investigating possible code violations at universities related to the recent college basketball corruption trial, according to a Yahoo Sports report published Tuesday night.

A jury has completed a second day of deliberations without a verdict in the trial of three men accused of defrauding schools by giving cash to families of college basketball recruits.

A New Jersey financial adviser-turned-bag man in a college basketball corruption scandal testified Wednesday about a clandestine mission last year to deliver an envelope with $19,400 in cash to the father of a highly sought-after prospect.