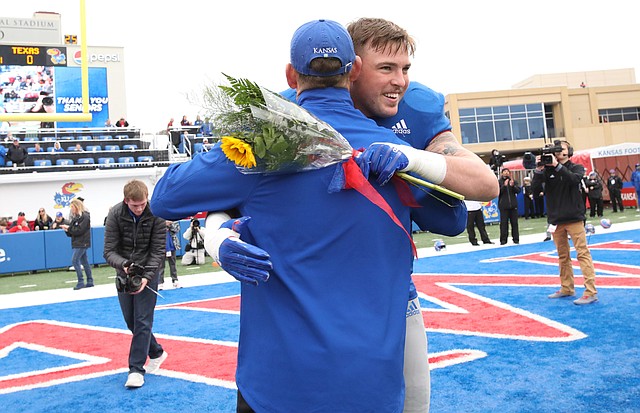 What kept any of the league’s 32 teams from selecting former KU linebacker Joe Dineen in the seven-round, 254-pick draft? “I don’t know what they were looking for, but I’m confident in myself,” Dineen said. “All I needed was a shot. So I’m excited.” By Benton Smith

Down in Florida this week for Saturday’s East-West Shrine Game, Lawrence native and recent University of Kansas graduate Joe Dineen learned the Senior CLASS Award named him a first-team All-American.

On Friday afternoon inside the Kansas football locker room, David Beaty had the floor one final time. Fired 19 days earlier, the outgoing head coach had plenty to tell his players after their final game together, a home loss to Texas. But Beaty also asked every assistant on his staff to speak, too. And while the messages from the head coach and his staffers included words of gratitude and love, they also urged the Jayhawks who have a chance to play for the next coaching staff to consider what could still be accomplished at KU. By Benton Smith