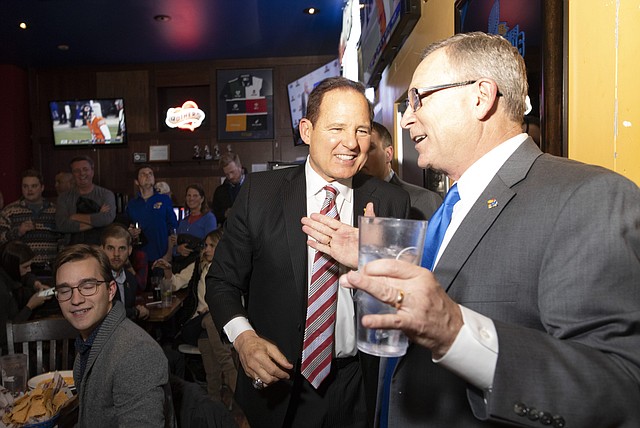 First 4 episodes of 'Miles to Go' debut on ESPN+

If you ever wondered what basketball coach Bill Self had to say to Jeff Long on the day the athletic director fired David Beaty or how Les Miles might react to seeing one of his players doubled over vomiting into a trash can, “Miles to Go,” has your answers.

Kansas football coach Les Miles won’t be able to talk on the record about any of his staff’s Class of 2020 recruits until those players officially become part of the program by signing a National Letters of Intent. However, Miles was able to speak far more generally on the subject of KU’s recent recruiting success during a “Hawks & Highways" tour stop earlier this week in Wichita. By Benton Smith

Les Miles set the tone on the importance of recruiting during his introductory press conference one week ago. Miles, of course, will likely not be targeting the same type of recruits at Kansas that he was going after during his time at LSU. The Jayhawks, who have just one commit from the 2019 class, have a limited number of available scholarships to hand out.

Bill Self: Les Miles a 'home-run hire' with credentials 'off the charts'

“I’m excited. I think everybody who supports us should be excited,” Bill Self said of Les Miles signing a five-year contract to take over the KU football program. By Benton Smith