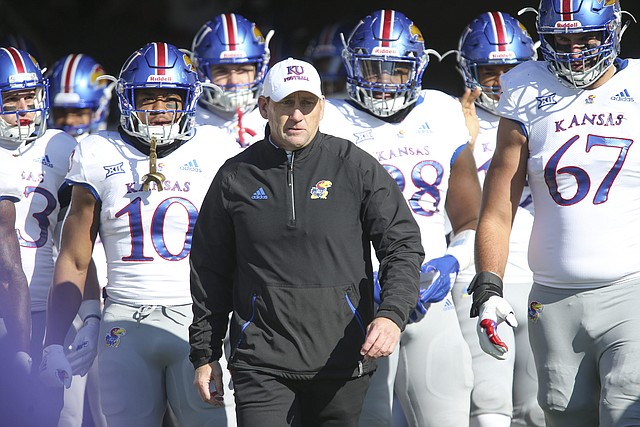 A June 5 settlement agreement between Kansas Athletics and former KU football coach David Beaty totaling $2.55 million shows that $357,000 of that total is designated to pay Beaty for claims of lost wages, while the remaining $2.193 million is to compensate Beaty for other claims against the university — mainly his disputed contractual buyout.

Unbeknownst to the public, former Kansas football coach David Beaty issued a response in his personal capacity to the Notice of Allegations KU received from the NCAA in September 2019. In it, Beaty — who went 6-42 in four seasons as the Jayhawks' coach and was fired in November 2018 — says the minor NCAA violations levied against him in the NOA were “concocted” by KU officials and are ultimately the result “of an institutionally initiated investigation” designed to avoid paying him a $3 million contract buyout.

A federal judge on Thursday denied a motion to dismiss a lawsuit that former University of Kansas football coach David Beaty filed against Kansas Athletics Inc.

Kansas Athletics has filed a motion in federal court to dismiss a lawsuit from former KU head football coach David Beaty that claims the athletic department owes him $3 million. By Benton Smtih

As David Beaty closes out his final days as football coach at the University of Kansas, he couldn’t escape at least a few questions about the future of the program and his successor, Les Miles. "I hope and pray for Jayhawk nation that they will get behind him, that they will give him the things that he needs to be successful," Beaty said. By Benton Smith

Shane Jackson: With nothing to lose, Beaty should take more chances against OU

During a weekend in Vegas this past summer, I placed a $5 bet on an electronic horse racing game and somehow — much to the chagrin of the rest of the bachelor party — managed to win $150 from that short race. For the rest of the weekend, I took more chances at the roulette table, or at least as risky as a recent college grad with a pile of student debt could be. After all, I was playing with money that I didn’t deserve to have.