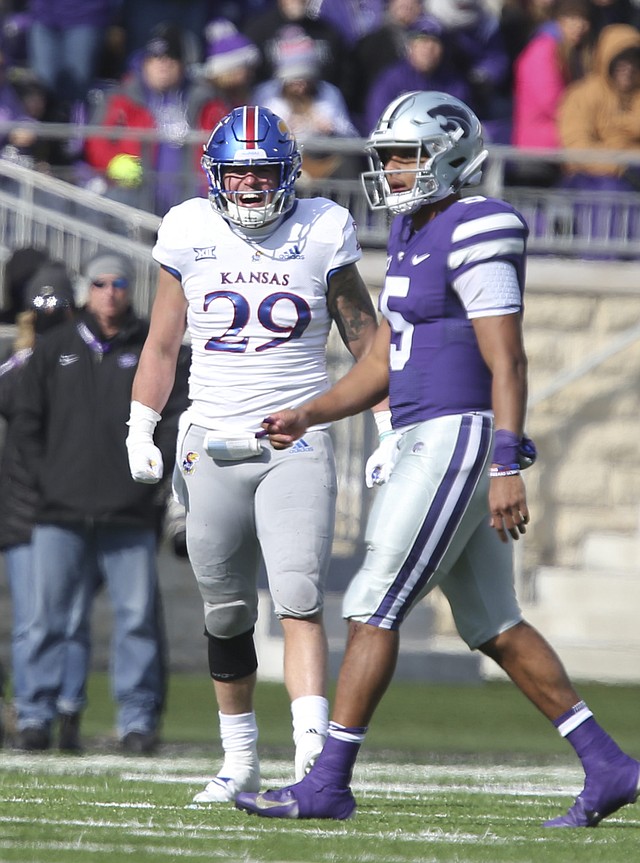 For someone who loves the city of Lawrence, where he grew up playing football and even stuck around for another five years after graduating from Free State High in order to play linebacker at the University of Kansas, Joe Dineen hopes to soon become a longterm resident of Denver, Colo. By Benton Smith

What kept any of the league’s 32 teams from selecting former KU linebacker Joe Dineen in the seven-round, 254-pick draft? “I don’t know what they were looking for, but I’m confident in myself,” Dineen said. “All I needed was a shot. So I’m excited.” By Benton Smith

For the second year in a row Sports Illustrated named University of Kansas linebacker Joe Dineen to its All-America second team. The redshirt senior defender from Lawrence led the Big 12 in tackles (147) and ranked fourth among all FBS players with 12.3 tackles per game. By Benton Smith

Jayhawks look to take advantage of primetime matchup with Sooners

Kansas senior linebacker Joe Dineen has experience his fair share of early kickoffs in his career. That’s why Dineen is looking forward to playing one of his last games as a Jayhawk in front of a national audience. KU (3-7, 1-6 Big 12) is slated to take on No. 6 Oklahoma (9-1, 6-1) at 6:30 p.m. Saturday in a road conference clash that will be broadcasted on Fox.

A solid outing from the Kansas football defense this past Saturday in Manhattan didn’t propel the Jayhawks to a victory. The efforts of KU redshirt senior linebacker Joe Dineen in the loss at Kansas State, though, put him in position to be named the Big 12’s Co-Defensive Player of the Week.