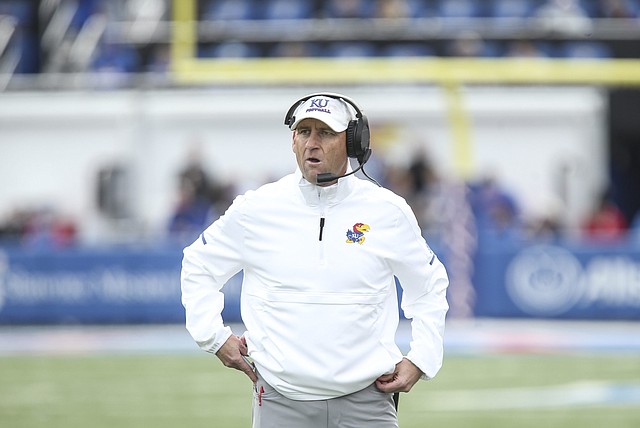 As former University of Kansas football coach David Beaty’s legal pursuit of his $3 million buyout continues, his attorneys are now seeking raw footage from a TV series starring his replacement.

Lawyers for former University of Kansas head football coach David Beaty filed on Friday a partial motion for summary judgment on their breach of contract claim in U.S. District Court for the district of Kansas. “It is beyond dispute that (Kansas Athletics) terminated the agreements without cause,” Beaty’s lawyers continue to argue in the latest filing, which asks the court to grant summary judgment on the matter.

Lawyers: KU 'continues to move the goal posts' on buyout

Former University of Kansas football coach David Beaty, who recently filed a lawsuit against KU, said Tuesday that the university's claim that he refused to cooperate with an investigation into possible NCAA violations is "verifiably false." By Benton Smith

Soon departing Kansas football coach David Beaty first heard rumors that his days on the job were numbered Saturday evening. But it wasn’t until Sunday, when athletic director Jeff Long called him mid-morning and scheduled a noon meeting, that the speculation became reality. Beaty detailed that and other aspects of Long’s decision to not retain him past the end of the season while answering questions Monday morning on the Big 12 coaches media teleconference. By Benton Smith

The corner of Twitter that keeps up with the Kansas football program caught fire with speculation in the hours following the Jayhawks’ 27-3 home loss to Iowa State on Saturday, with a report of KU moving on from head coach David Beaty. By Benton Smith