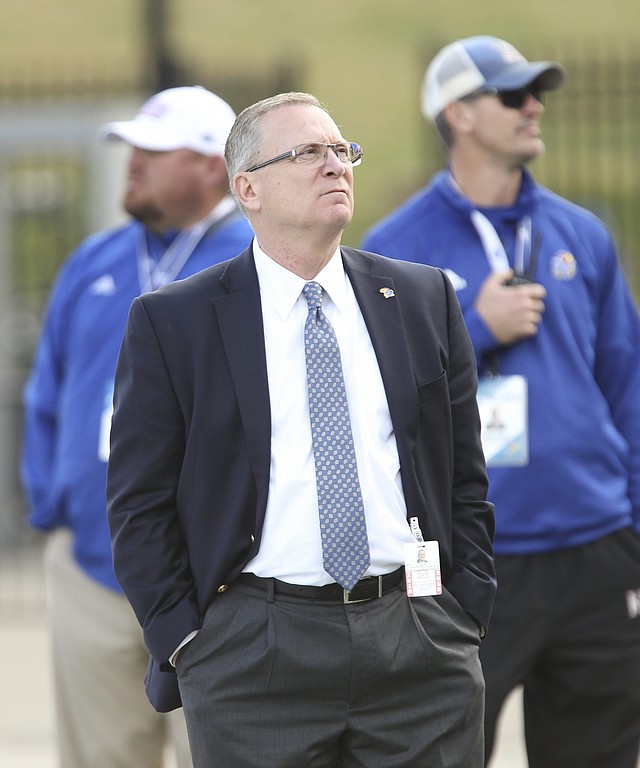 You don’t expect to hear the words “incredibly awkward times” come from the mouth of a college administrator with three-plus decades of experience who prides himself on having seen just about everything. By Matt Tait

This isn’t Jeff Long’s first search for a head football coach, but the University of Kansas athletic director is dealing with a different set of circumstances this time around. By Benton Smith

For the second time in a week a flight plan connecting Lawrence and Baton Rouge, La., sparked the interest of those following the ongoing Kansas football coaching search.

I ran into Kansas Athletic Director Jeff Long on Tuesday night in Indianapolis, and while chatting with him before KU’s basketball victory over Michigan State we talked a little football, too. By Matt Tait

University of Kansas athletic director Jeff Long wasn’t able to introduce the football program’s next head coach Sunday night, hours after informing acting coach David Beaty he won’t be retained for a fifth season. But during a 30-minute press conference inside Hadl Auditorium in the Wangon Athlete Center, Long shed more light on the search at hand and how he will handle his first significant hire since becoming KU’s AD a little more than three months ago. By Benton Smith