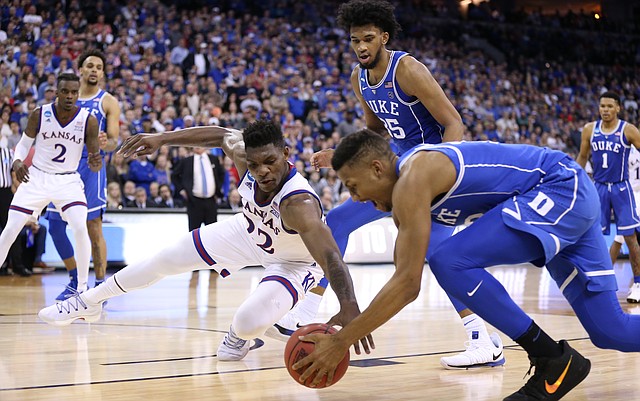 Kansas forward Silvio De Sousa (22) and Duke forward Javin DeLaurier (12) fight for a ball during the second half, Sunday, March 25, 2018 at CenturyLink Center in Omaha, Neb.

One of the most recent and notable games of KU junior Silvio De Sousa’s college career came against Tuesday night’s opponent. By Matt Tait

It’s been more than two months since a federal indictment alleged the guardians of two unnamed University of Kansas basketball players — widely believed to be current KU big man Silvio De Sousa and former forward Billy Preston — received illegal payments in a scandal orchestrated by an Adidas executive. But nothing that has transpired since leads head coach Bill Self to think De Sousa will be ineligible to play as a sophomore this coming season. By Benton Smith

Silvio De Sousa sat at his locker with a bandage on his left knee, a bloodstain on the fabric over his thigh and a single piece of red confetti stuck to his shoulder. It was a “heavyweight bout,” coach Bill Self would later say, and De Sousa looked the part of the champion. By Scott Chasen

Needless to say, without Silvio we'd already be done. His play has been the insurance, and the combination of Doke and Mitch has suddenly increased its effectiveness. Each of the three brings something different.

This is not the definitive picture of this play. In the Baseline View (which I love to watch after each game) there is a picture that clearly shows Silvio's hand off the ball, while DeLaurier's fingers are still on it. It was a super close call, but Krug caught indisputable evidence on film that the refs got that one right.

Of course there was also the deflection by Grayson that was called the wrong way - and then also the controversial charge call late.