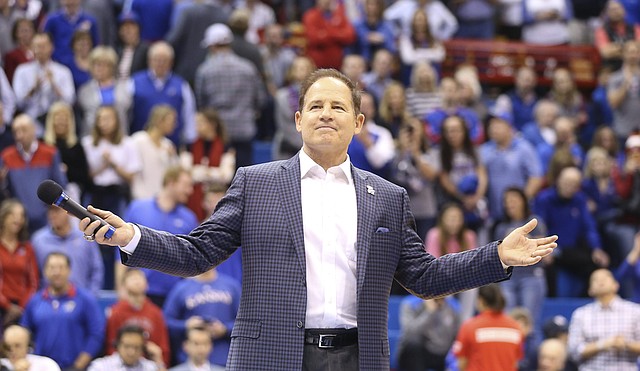 Matt Tait: The optimist's outlook on the 2019 KU football team

After a long offseason full of changes, Kansas fans are that much closer to learning the answer to the biggest question surrounding Les Miles’ football program — how good can the 2019 Jayhawks be? By Matt Tait

With the help of a camera crew that has followed Les Miles since this past November and will continue documenting the head football coach and his staff throughout his debut season at the University of Kansas, fans soon will get to go behind the scenes for glimpses of Miles’ endeavors to rebuild the program. By Benton Smith

Following his team’s sixth spring practice Tuesday evening, University of Kansas football coach Les Miles didn’t reveal much about the status of any position battles, but he couldn’t hold back a detail regarding the program’s upcoming spring game. While as of Tuesday night KU didn’t officially have a deal in place with the Grammy-nominated rap artist, a KU spokesperson confirmed that the athletic department has been in the process of setting up a performance by Ross for the event. By Benton Smith

You’ve seen him eat grass. You’ve seen him steal the national championship trophy in a Dr. Pepper commercial. And soon you’ll have a chance to watch Les Miles rappel down the side of a building. By Benton Smith

There’s enough reason to believe that Chip Lindsey was not Kansas football coach Les Miles’ first choice as KU’s new offensive coordinator to make Lindsey’s departure a little easier to digest. But that’s only if Miles’ Plan C or Plan D or Plan E or wherever we’re at on the list at this point can bring the same kind of buzz and clout to the long-suffering KU program. By Matt Tait

Just a few hours into college football’s early signing period on Wednesday morning, the Kansas football program’s 2019 recruiting class grew. New head coach Les Miles and his staff had eight verbal commitments in place entering the day, but added one target they had recruited hard the past several weeks right off the bat. Plus, the Jayhawks signed a quarterback prospect who first committed to former head coach David Beaty and his staff before 2018’s National Signing Day. By Benton Smith