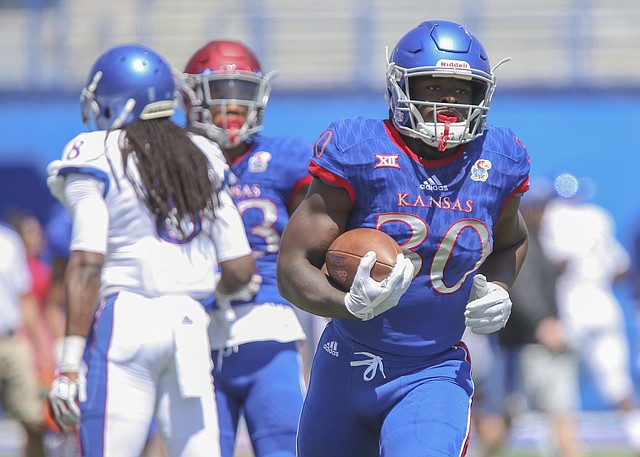 When the KU football team’s medical staff discovered Kezelee Flomo, a transfer from North Dakota School of Science, had a heart condition, the 5-foot-10, 215-pound would-be senior had to retire. Even so, Flomo remains involved in a student-coach capacity, and the program announced Wednesday the former running back will be awarded a scholarship. By Benton Smith

Now that preseason camp has arrived, the Kansas football team’s offensive line looks significantly different than it did just a week ago. By Benton Smith

Each of the Jayhawks’ top three rushers from 2017 — Khalil Herbert, Taylor Martin and Dom Williams — return. Plus, KU added four-star Louisiana recruit Anthony “Pooka” Williams to its roster. An entirely different, unsung running back, though, left an impression on the team’s linebackers during spring practices. By Benton Smith

While anybody who follows the program knows how valuable veterans such as Daniel Wise, Steven Sims Jr. and Joe Dineen are for Kansas football, the significance of dozens of their teammates easily goes unnoticed, especially this time of year, with the season still months away. Accordingly, head coach David Beaty recently commended some of the less heralded players who impressed him in one way or another over the past several weeks. By Benton Smith