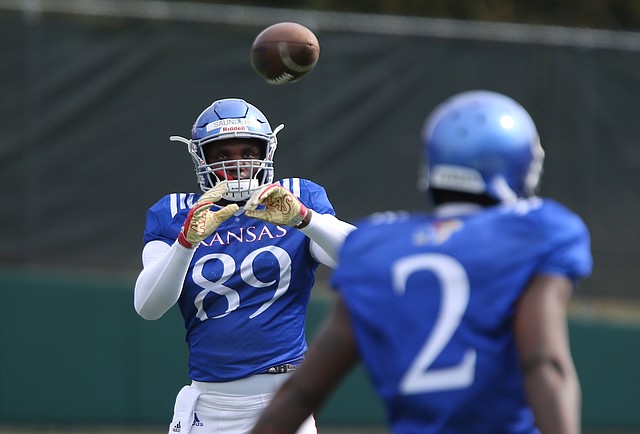 Tom Keegan: For KU tight ends past and present, it's all about catching opportunities

The Associated Press released its midseason All-American team Tuesday afternoon, and not surprisingly, one of David Beaty’s Kansas recruits made the first-team offense.

Notebook: Transfers find ways to contribute for Jayhawks at WVU

The Kansas football defense spent more time in an opponent’s backfield Saturday at No. 9 West Virginia than it had in any other point during the first half of the season. One man responsible for that success was a first-time starter up front. Plus: Out of the lineup three of the previous four weeks, Mavin Saunders proved helpful in his return to action at WVU. By Benton Smith

Leading up to the start of spring practices, Kansas football coach David Beaty didn’t know exactly what to expect out of the team’s tight ends. “I was concerned,” the coach bluntly revealed. Those unsettling feelings began to dissipate for Beaty once James Sosinski returned from his foray as a KU basketball walk-on. By Benton Smith