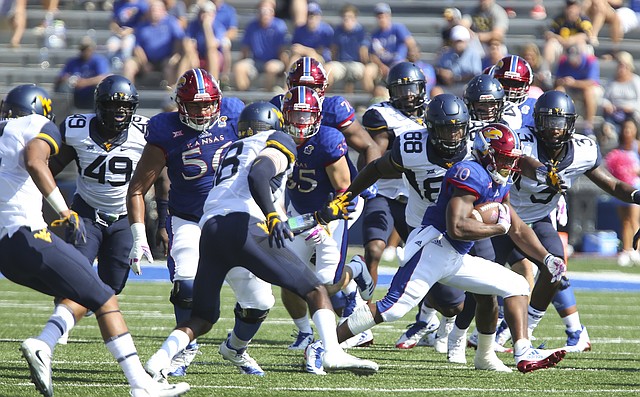 Kansas running back Khalil Herbert (10) tries to break away from the West Virginia defense during the first quarter on Saturday, Sept. 23, 2017 at Memorial Stadium.

To run or not to run: Where KU's offense goes from here

Doug Meacham’s coaching career included stops as an offensive coordinator or co-coordinator at six other college football programs before he arrived at Kansas. As a play-caller, the Jayhawks’ Air Raid authority almost felt out of his element during a rush-heavy loss to West Virginia on Sept. 23. By Benton Smith

Despite little playing time in the first two games of the season, Kansas football players and coaches were aware of the talent of sophomore running back Khalil Herbert. By Bobby Nightengale

Despite one of the best outings in school history by sophomore running back Khalil Herbert on Saturday, the Kansas football team couldn’t keep up with West Virginia in a 56-34 loss at Memorial Stadium in its Big 12 opener. By Bobby Nightengale