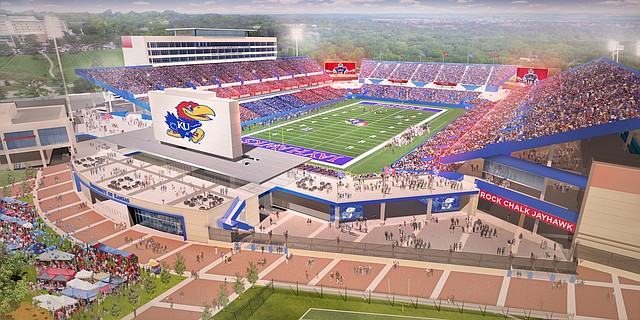 The search committee, multiple people who would know have told me, recommended University of Kansas Provost Neeli Bendapudi as successor to Chancellor Bernadette Gray-Little, but the regents went with their own choice, Dr. Doug Girod.

“Raise the Chant,” seems far too ambitious a slogan for the fundraising campaign aimed at giving David Booth company in trying to bring state-of-the-art upgrades to the Kansas football stadium.

The future of Memorial Stadium now has a vivid picture to go with it — and some of the money required to eventually carry out that vision. Kansas Athletics on Friday unveiled renderings for large-scale improvements to the football program’s facilities, which were met with a $50 million pledge — the largest in the athletic department’s history — from KU alumnus and benefactor David Booth.

Interesting. The picture squares off the stadium on the south end. Thats the big change. Then,Two large screens in each corner. And expanded building with new Scoreboard in the North end zone a year later. And, new seating and a paint job. We must be spending a lot of that money on other things like the new in door practice facility. I am surprised they don't lower the field and add more seats down low.....but thats understandable. We can't fill the stadium as it is.