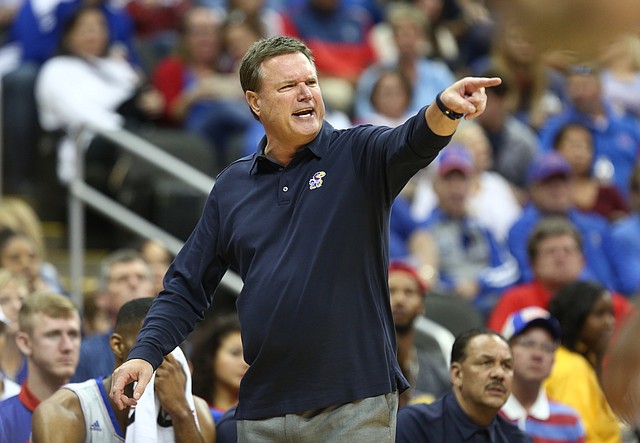 Kansas head coach Bill Self gets at his players during the second half of the Showdown for Relief exhibition, Sunday, Oct. 22, 2017 at Sprint Center in Kansas City, Missouri.

With the first official basketball game against Missouri in more than 3,500 days now just hours away, Kansas basketball coach Bill Self was asked on Thursday why the game is finally being played again. His answer was short and sweet. “Time’s passed," he said. By Matt Tait

Bill Self: David Beaty 'a pro' in how he's handled news of firing

Since University of Kansas athletic director Jeff Long announced his decision to move on from David Beaty as KU’s football coach, basketball coach Bill Self has not spoken with the soon-departing football coach in person.

It was billed as the day Kansas basketball coach Bill Self would go “Over the Edge” and rappel down a seven-story building for charity. Instead, the KU coach will watch staff members Kurtis Townsend and Jeremy Case scale down the 888 Lofts building in his place. By Matt Tait

Bill Self didn’t face many snags during his debut as head coach of USA Basketball’s U18 team Sunday night at the FIBA Americas championship. Nevertheless, after the US rolled past Dominican Republic, 105-73, in its preliminary-round opener, in St. Catharines, Ontario, Canada, the University of Kansas head coach sounded as demanding in June as he would in the heat of Big 12 play in January or February. By Benton Smith

There was one thing Kansas coach Bill Self liked most about his team’s 93-87 victory over Missouri during Sunday’s Showdown for Relief at Sprint Center. And it was not the final score or the $1.75 million dollars the two programs raised for hurricane relief. By Matt Tait