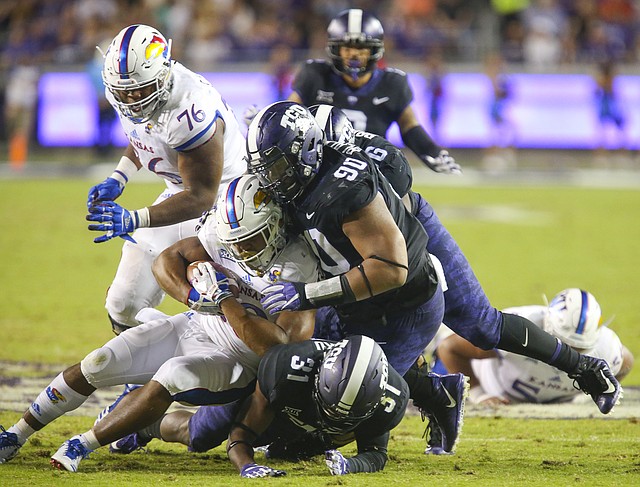 Kansas running back Khalil Herbert (10) is driven to the ground by TCU defensive tackle Ross Blacklock (90) and TCU safety Ridwan Issahaku (31) during the second quarter, Saturday, Oct. 21, 2017 at Amon G. Carter Stadium in Fort Worth.

Jayhawks: Offense in far better place than it was in 2017 debacle at TCU

With 40 career starts already on his résumé, Kansas senior offensive lineman typically can remember at least some detail about every college football game in which he has appeared. Close to two years removed from a nightmarish trip to TCU in 2017, Adeniji cringed when asked what he recalled about that one. By Benton Smith

Beaty: Kansas must 'be able to run the ball' in Big 12

In the wake of a mortifying offensive outing at TCU, head coach David Beaty and his Kansas football staff are taxed with doing everything within their power to make the Jayhawks competitive. While areas of concern exist across the board following back-to-back shutout blowouts on the road, a reinvigorated KU rushing attack could be as good a starting point as any. By Benton Smith