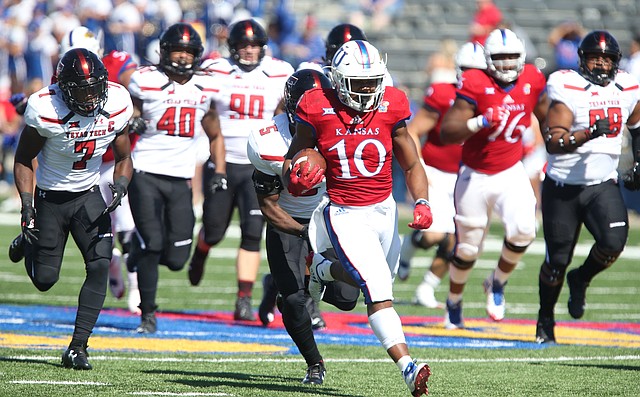 Jayhawks think each of the top 3 RBs could be 'explosive'

Next to running back on the Kansas football team’s published depth chart this week, you can find the names of three players, each separated by an “or.” When the Jayhawks make their season debut Saturday against Nicholls State, the starter might be junior Khalil Herbert. Or it could be sophomore Dom Williams. Or just maybe true freshman Pooka Williams will be the first to line up in the backfield. By Benton Smith

Frisco, Texas — Big 12 football players take being selected to represent their universities at Media Day as an honor. They dress like business executives and genuinely seem to enjoy the experience.

During the same session in which he avoided to the best of his ability hyperbolic compliments, David Beaty actually uttered a 17-word sentence that I found more encouraging than any words I ever have heard him speak. By Tom Keegan

Get the keys to the Sunflower Showdown before the Kansas football team takes on rival Kansas State at Memorial Stadium. By Benton Smith