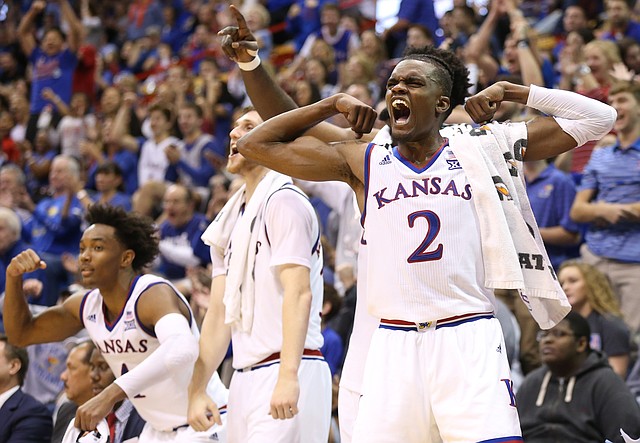 Kansas guard Lagerald Vick (2) flexes after a bucket from reserve guard Chris Teahan during the second half on Friday, Nov. 24, 2017 at Allen Fieldhouse.

Despite having limited past interactions with the lone senior on this year’s roster, two current Kansas basketball players recently acknowledged recently that they had been thrilled by what they had seen so far from Lagerald Vick, who decided to return to KU after dabbling with the idea of leaving school a year early. By Matt Tait

If the 2018 NCAA Tournament began today, the Kansas Jayhawks would be a No. 2 seed in the West region. That was the message sent by this year's selection committee, which on Sunday revealed the top four seeds in each region, as things stand today, during an afternoon special on CBS Sports. By Matt Tait

Kansas coach Bill Self is in search of a dog. But not because he lost the family pet or is trying to get rid of pesky cats in his neighborhood. By Matt Tait