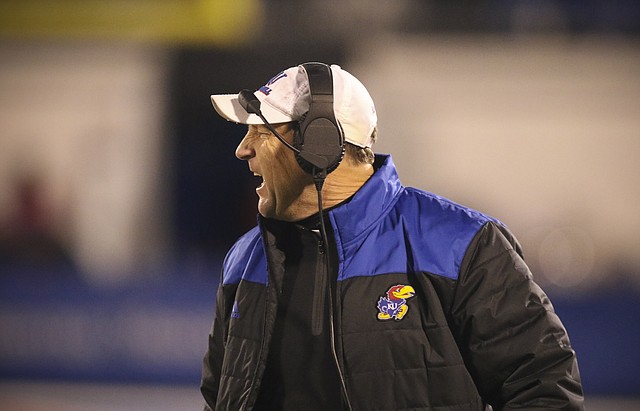 Kansas head coach David Beaty yells at a player during the third quarter on Saturday, Nov. 18, 2017 at Memorial Stadium.

Over the past year, David Beaty often has asserted he deals in “reality” when it comes to the onerous business of reversing the University of Kansas football program’s fortunes. Currently, just ahead of his fourth season leading the Jayhawks, Beaty said his vantage point remains un-skewed. And he understands that because of the team’s 3-33 record under his watch and the arrival of new athletic director Jeff Long, his existence currently involves much outside speculation about his job security. By Benton Smith

It appears Kansas football coach David Beaty has found the final assistant coach to round out his staff. According to Jon Kirby of Jayhawk Slant, Beaty is set to hire coaching veteran Bill Miller as a defensive assistant. By Benton Smith

In the midst of his final post-game comments following KU's 1-11 season, while explaining the patience KU athletic director Sheahon Zenger displayed in continuing to back him, despite a 3-33 record in three years, David Beaty stated rebuilds don’t always include a quick fix. “Sometimes there is, but it will be short-lived if you’re not careful,” Beaty said at the time, “So we’re trying to do it the right way. Trying to do it with guys that have three to four-plus years to where we can develop them.” In the weeks that followed those remarks, Beaty and his staff added seven junior college players to KU’s 2018 recruiting class, and signed nine in total this past week. By Benton Smith

David Beaty wasn't part of the captains' plan to stiff Baker Mayfield at the coin-toss handshake, but the coach did let the captains have a role in deciding the nature of the "punishment."

A couple days removed from seeing three of his Kansas football team’s defensive captains refuse to shake hands with Oklahoma quarterback Baker Mayfield prior to kickoff, head coach David Beaty took a contrite stance on the matter Monday morning, on the Big 12 coaches media teleconference. “First of all, that was absolutely unacceptable,” Beaty began, when asked to further explain the occurrence, adding he reached out to OU head coach Lincoln Riley to apologize “on the behalf of myself and our team.” By Benton Smith